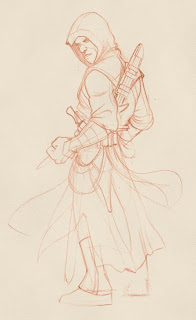 It has been a while since I posted anything up on here... mostly due to me being away in Italy on honeymoon for most of July and August (which is one of my better excuses, it must be said). Anyway, I am slightly ashamed to admit that whilst strolling around Florence and Venice – and though I did genuinely soak up a great deal of 'real' history and culture whilst there – I found it astonishingly difficult to not think about Assassin's Creed 2.

So to cut a dull story short: since returning home, I have had a deep urge to draw some Assassin-like figures (is that a worry?). And here is the start I made on the seriously awesome character of Altair (who is from the original game, I know, ye pedants).

Alex Leonard
I am a freelance illustrator based in the Orkney Isles.